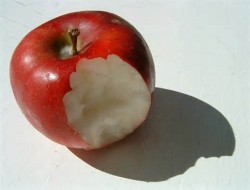 The other day I was frustrated as I admonished Gracie ONCE AGAIN for leaving her clothes strewn all over her room. “Sorry, Mama.” She said as I sighed in exasperation. She dutifully (and cheerfully!) began to pick up her room. As she worked away she proclaimed in her typical “this is truth” voice: “If only Adam had not eaten from the apple… then I would not be so bad at keeping my room clean!” My heart melted because her actions and her tone of voice held together two seemingly contradicting elements. She was taking responsibility for her falling short by cleaning up, but her tone of voice was not blaming Adam, it conveyed understanding for the fallen nature of the world yet harbored no condemnation for her short coming. She was fully confident in His grace, in spite of her failure.

I started to think about my own sin and how hard it is sometimes to release myself into His grace- taking responsibility for my sins and yet having confidence that He has set me free from them so they have no hold on me anymore. It got me thinking of John 8: 1-11….

But Jesus went to the Mount of Olives. At dawn he appeared again in the temple courts, where all the people gathered around him, and he sat down to teach them. The teachers of the law and the Pharisees brought in a woman caught in adultery….”Teacher, this woman was caught in the act of adultery. In the Law Moses commanded us to stone such women. Now what do you say?” They were using this question as a trap, in order to have a basis for accusing him. But Jesus bent down and started to write on the ground with his finger. When they kept on questioning him, he straightened up and said to them, “If any one of you is without sin, let him be the first to throw a stone at her.” Again he stooped down and wrote on the ground. At this, those who heard began to go away one at a time, the older ones first, until only Jesus was left…. Jesus straightened up and asked her, “Woman, where are they? Has no one condemned you?” “No one, sir,” she said. “Then neither do I condemn you,” Jesus declared. “Go now and leave your life of sin.” (John 8:1-11)

Curled in a ball, cowered down. Face in the dirt— dirt in the tears. A dry hoarse voice cries out with a gasp. The pressure of guilt and fear press down on her chest to the point of breathlessness. She rocks her body back and forth with eyes smashed shut to block out the light of the world’s judgment. She hugs her own self close as another gasp of air groans painfully from her constricted chest. She cowers in the dust as she begs not to have to open her eyes to see the face of judgment come barreling at her with the force of a stone hurled by the power of vengeance and self-righteousness. She struggles in the dirt railing at herself for her sin. In agony she

waits for the first crushing blow of death…. Yet nothing … and when she finally opens her eyes….the ground is littered with abandoned stones and only He stands before her with His gentle questions- questions spoken not like questions, but more like truths- saying “What are you afraid of? There is therefore now no condemnation for you… Why are you still on the ground? Get up! You are free.”

The sin in our lives and in our hearts is very real, and very painful. We’re all the adulteress- perhaps not in the specific sin of infidelity, but anything we love more than God—any sin is an adulteration. Caught in failing where do you find yourself?

Maybe sometimes we are one of the crowd- ready to hurl rocks at others without willingness to recognize our own sin. But most often when faced with a conviction we are the woman rolling around in the dirt with our guilt waiting to be pummeled with stones.

Here is a question- How long will you roll in the dirt? Do you not realize that if you open your eyes you will find Him standing there- not only a barrier between you and the accusers, but He stands there alone and the accusers are gone. You are free.

Embrace God’s promise in Romans 8:1 Therefore, there is now no condemnation for those who are in Christ Jesus.

Get up out of the dust and remember: If anyone is in Christ, he is a new creation; the old has gone, the new has come! (2 Corinthians 5:17)

Perhaps you believe wallowing in the muck of our sins is part of the “process,” but be warned- it is not so. Rolling in the dirt does not transform. Rolling in the dirt only makes you dirtier! Stop rolling in the dust! Open your eyes! See your Jesus standing there between you and the accuser. Those rocks meant for you— He allowed them crush Himself instead. Do not gloss over that too quickly! The scriptures say he was crushed for our transgressions… Ponder not only that you are free— but HOW you are free: Because He paid the debt and died in your place. And ponder  WHY you are free: To “Go and leave your life of sin.”

You are free because of the price He paid for you…

Now, hear his voice – “Then neither do I condemn you.”

And be transformed! “Go now and leave your life of sin.”

Yes, Adam ate from the apple bringing sin and death, but then God came into the world bringing redemption and life. He has conquered your sin and death.

You are a New Creation– embrace His grace… Get up out of the dirt— and GO!