Jesus is On Your Side: Therefore Put on the Full Armor of God

Jesus is On Your Side: Therefore Put on the Full Armor of God 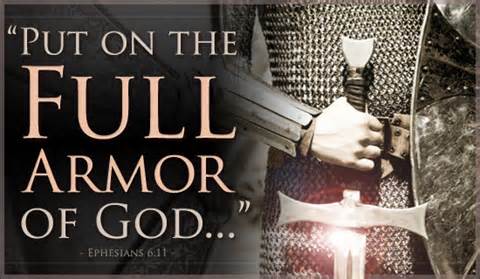 We live in a world that is wrought with the consequences of the fall. From physical illness to false idols capturing our hearts, from hurtful relationships to violent loss of loved ones we cannot understand— the world is full of suffering and pitfalls. And in the midst of all of that we are called to be brave, step out in faith toward the Lord and to serve Him and His purposes. Sometimes in the midst of it all, it’s hard to be brave. I think mainly because we forget this key point: Jesus is on your side. The God of angel armies is always by your side. But, I would argue today, that He is far more than that!

What are we supposed to do to protect ourselves as we bravely step out to walk by faith in any circumstance? Paul tells us in Ephesians to put on the Full Armor of God! Have you ever thought about what it means to put on the full armor of God? Doug and I have a running line we say to each other- Jesus is the answer! Jesus is always the answer! As we unpack this scripture let’s apply the thesis: Everything in the Bible points to Jesus, because: Jesus is the answer:

Finally, be strong in the Lord and in his mighty power. Put on the full armor of God so that you can take your stand against the devil’s schemes. For our struggle is not against flesh and blood, but against the rulers, against the authorities, against the powers of this dark world and against the spiritual forces of evil in the heavenly realms. Therefore put on the full armor of God, so that when the day of evil comes, you may be able to stand your ground, and after you have done everything, to stand. Stand firm then, with the belt of truth buckled around your waist, with the breastplate of righteousness in place, and with your feet fitted with the readiness that comes from the gospel of peace. In addition to all this, take up the shield of faith, with which you can extinguish all the flaming arrows of the evil one. Take the helmet of salvation and the sword of the Spirit, which is the word of God. (Ephesians 6:10-18)

As I was mediating on these verses in light of who Jesus is, I specifically examined each article in the Armor of God, and this is what I found:

The Belt of Truth– In a soldier’s armor the belt was significant. The belt was what held all of his armor in place.

“You are a king, then!” said Pilate. Jesus answered, “You are right in saying I am a king. In fact, for this reason I was born, and for this I came into the world, to testify to the truth. Everyone on the side of truth listens to me.”

Jesus is the Belt of Truth

The Breastplate of Righteousness– In battle a breastplate was in place to protect your vital organs. Its job was to save you

from the death blow.

On the cross Jesus called out with a loud voice, “Father, into your hands I commit my spirit.” When he had said this, he breathed his last. The centurion, seeing what had happened, praised God and said, “Surely this was a righteous man.” (Luke 23:44-47)

Do you realize that on the cross Jesus saved you from the death blow?

Jesus is the Breastplate of Righteousness

Feet Fitted with the Gospel of Peace– Battle shoes had spikes or cleats to keep your footing steady. They allowed you to grip into the ground so that you would not be afraid of falling, but able to stand firm and walk sure.

Jesus tells us: Peace I leave with you; my peace I give you. I do not give to you as the world gives. Do not let your hearts be troubled and do not be afraid. (John 14:26-17)

I also recently learned that the word “gospel” in the original language was actually war terminology. When armies went into battle if they were victorious they returned with the “gospel” or the good news that they had won.  On the cross God won! Jesus declared with his last breath “It is finished.” At His resurrection He won victory over sin and death. More than that, the Lord did not come down and wipe us out with victory by annihilation. Instead He won with the victory of Love- by gifting us with the ultimate example  of turning the other cheek and putting  us at peace with God. Therefore, since we have been justified through faith, we have peace with God through our Lord Jesus Christ.  (Roams 5:1)

You can celebrate the good news in utter assurance with your feet planted in knowing that no matter what is before you— all you have to do is STAND. The Victory is won and you are at peace with God. Ephesians 2:14 says: “For He himself is our peace….”

Jesus is the Gospel of Peace

The Shield of Faith– In battle the shield protected you from projectiles (flaming arrows) that were meant to cause panic. This

is what the enemy does in spiritual warfare- hurling fears and lies to make you panic! The shield protects you from perishing in the onslaught of projectiles.

“For God so loved the world that he gave his only son, that whoever believes in him shall not perish” (John 3:16)

Jesus is the Shield of faith.

The Helmet of Salvation-In battle the helmet protects your head, your brain

from having its sense knocked out. The helmet of salvation is what keeps you from discouragement and losing your senses— because you know God has saved you and is saving you!

When Simeon saw Jesus presented at the temple he took him in his arms and praised God, saying: My eyes have seen your salvation (Luke 2:29-30)

In Acts we are told: Salvation is found in no one else, for there is no other name under heaven given to men by which we may be saved.“ (Acts 4:12)

Jesus is the Helmet of Salvation.

The Sword of the Spirit which is the word of God– In Battle the sword was your “weapon” to strike at the enemy.

Remember that when Jesus stood against the enemy in the desert he fought back with the word of God.

In John 1:1 we see that “In the beginning was the word and the word was made flesh”

Jesus is the Sword of the Word.

Jesus is the Armor of God!

Jesus is the answer!

I don’t know if this excites you or not. I know this is a lot of “battle” talk and especially for the ladies— I know we don’t often think of getting ourselves battle ready or battle hardened. But you know what, whether you are a guy or a gal, I don’t mean to sound awful when I say this, but I have no other way to say it than to just be blunt: You are a fool if you don’t think the enemy is targeting you. If you are a part of God’s family then you are a son or daughter of the One True King. But that status and position does not come with just getting rescued and sitting at the palace. If you are part of the family of God you are also a warrior in His army and if you are serving Him in ANY capacity the enemy IS gunning for you— and you better be ready.

In the book Epic, John Eldridge talks about the great epic stories in literature and film. He takes a CS Lewis/ JRR Tolkein approach with the thesis that every story has a whisper of the Gospel in it because every story is simply a reflection of the story

Only your hero is not just coming to rescue you and take you back to the palace. He rescued you for the purpose of transforming you, clothing you in His full armor and taking you into the battle with Him.

Remember today that no matter what you face or where you need to step next- you can be brave. Jesus is on your side! In fact, He IS the armor that will allow you to stand in battle and He alone will save your life!