Return Good to Evil: A Devotional of Grace

Last night we ushered our sweet dog Dutch into the arms of the Lord. While we weather this sorrow, we turn to what we know. Amidst what we know is a tribute to our gentle giant.

We know that the sovereign Lord uniquely created this handsome guy. The Lord ordained the day Dutch was born 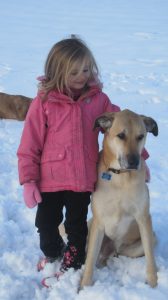 and foresaw the day he and his liter would be abandoned by the road. God orchestrated the moment 14 years ago when I’d walk into the Leesburg PetCo- “coincidentally” on the day the animal shelter was doing adoptions. And He shaped my heart to fall in love at first sight with this goofy puppy whose feet were too big for his gangly body.

It was the Lord who formed Dutch’s perfect temperament. We called him our gentle giant because that’s exactly what he was. Always a gentleman, never a glutton for attention, he maintained a calm and stately manner. He had a big deep bark, but used it sparingly. Whenever someone met our dogs, they always said he was the one they wanted to take home. Above all Dutch was a protector. This came out abundantly after Grace was born. When she was an infant he’d sit directly in front of whoever was holding her. At full attention with his back to us he would face out like a sentry on watch. As Grace got older, whenever someone new came over he would position himself directly between them and Grace until he was finished giving them his “background check.” When they “passed” he’d move aside, but never too far.

Every night Dutch would dutifully go on patrol. Just before bed he’d go outside and walk the perimeter of the house to check that everything was secure. As everyone nestled into bed, Dutch was always the last to settle in. He’d do his final patrol around the house stopping first check on Grace. Dutch would rest his head on the side of her bed. After she gave him a pat he’d come to our room to “check” on us. Then he would circle back downstairs where he’d take up his watch post on the coach for the night.

I wish we had known that Tuesday night was his last patrol. Though we did not, the Lord knew. Jesus tells us of the sparrows, that “not one of them will fall to the ground without your Father knowing. (Matthew 10:29, CEB) God loves His creation so much that He’s aware when the smallest sparrow takes its last breath. I know the Lord was with us as our sweet guy took His last.

All creation sings His Praise

I know you might think this is crazy, but I know that dog praised the Lord. The Psalms are full of pronouncements of the rocks, hills, stars, waters and creatures of every kind singing God’s praise. The book of Revelation tells us that “every creature in heaven and on earth and under the earth and in the sea” sing “blessing and honor and glory” to the Lord. (Revelation 5:13 ESV) Dutch lived a life not just of duty, but also of praise. While much of his demeanor was calm and stately, on occasions he’d break out into full-on “Frolic!” In an instant, Dutch would transform from statesmen to romping, galloping, jumping praise- and I swear that dog was smiling the whole time. He would most often frolic when we walked through one field, such that we officially call it: “The frolic field.” He’d typically come and nudge us to join him, and we would run and jump and frolic too. There are fewer things that gave us such laughter and joy as watching Dutch frolic. It was a look at God’s creation praising Him, and a small taste of the hope of heaven.

We’ve shed many tears since last night. But even in our sadness we know the Lord is near. In our tears, last night I thanked Doug for being crazy with me and having four dogs. He said he loved every minute of it. As we cried together this morning I told him how thankful I was that he was tender-hearted. He said: “I hate it…” But we both know that’s not true. We love to love. We love because God first loved us, and love brings with it both joy and pain.

“To love at all is to be vulnerable. Love anything and your heart will be wrung and possibly broken. If you want to make sure of keeping it intact you must give it to no one, not even an animal. Wrap it carefully round… avoid all entanglements. Lock it up safe in the casket or coffin of your selfishness. But in that casket, safe, dark, motionless, airless, it will change. It will not be broken; it will become unbreakable, impenetrable, irredeemable. To love is to be vulnerable.” (The Four Loves)

This morning as I cried and reflected on that, I said to the Lord “Anything you want, Lord. Anyone you want me to love- I’m all in, no matter how much it might hurt…. Because I know that kind of love is your kind of love.”

The thing I’ll miss most about Dutch was how he sensed when we were full of joy or overwhelmed or sad. He always knew. At just the right moment he’d come up next to me and lean against me with his big barrel chest. As he leaned in I would feel a gentle, firm reassurance. It was like a soft whisper from my Father in heaven saying: “You are protected. You are watched over. You are loved….”

To Dutch our gentle giant: Thank you for all the frolics. Thank you for every patrol. From the first to the last, you were a gift. You were a once in a life-time friend.