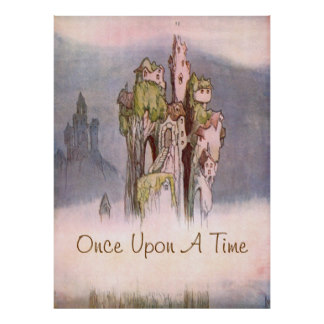 Grace loves stories. She loves to read, write and tell her own made up stories. Almost all of her play time, with friends or dolls, is spent in the imaginative, creative stories she spins. One afternoon she began to tell me one of her tales, only this tale was dark, full of despair and death. The more she spun the story the more upset I became, and finally asked: “Grace, where is this story coming from? I don’t like this, it is terrible!”

She responded: “Well, it’s from an ‘end of the world’ game I was playing with my friends.”

She continued the story with more death and despair. I couldn’t take it and just blurted out: “I don’t like this! Where is this story going? If we’re all going to be saved then I’ll go to the dark place, but if we’re not getting saved in the end, I’m not listening anymore!”

“OH!” she exclaimed in an “ah-ha” moment, as the story took a whole new turn that ended in salvation. When she finished we spoke about stories and our imaginations. We discussed the books we read, movies we watch and stories we make up in our minds. I said: “Grace, not everything is good for your mind. You must be discerning about what you are taking in for entertainment and you must be careful about where you allow your imagination to go. There are some stories that are not good for you. In every story, you need to be looking for the Jesus element, the Gospel whisper. If a story is spiraling into darkness with no hope for redemption or salvation, then that story is not good for your soul.”

I got to thinking about the stories I’m drawn to, both fiction and non-fiction. Every one of them has the “Jesus element.” I love James Bond because the good guy saves the world and the bad guy gets defeated. I’m drawn to Jane Autsen because romance and love overcome adversity and the scoundrel is always exposed. I love Star Wars, Star Trek and (most) super hero stories because they’re battles of good verses evil, where good prevails. I am drawn to The Chronicles of Narnia and The Lord of the Rings for those same reasons. Though I could only watch them once, I love movies like Grand Tarino with Clint Eastwood and 7 Pounds with Will Smith because in them someone sacrifices their own life so the ones they love can live. I get lost in true stories of the same kind too. Like Joshua Lawerence Chamberlain’s bravery in the Civil War at Little Round Top, or The 101st Airborne, the Band of Brothers from World War II who fought to destroy the pervasive evil of Nazism. The real sacrifices of those real men bring me to tears! And ever since I was a child I’ve loved Fairy Tales. I can’t get enough of the “Happily ever after” ending.

If you listen to the wisdom of the world today their answer to that question would say I’m attracted to those stories because I’m a shallow sap who is trying to escape reality. Even my faith in Jesus would be counted as one more fairy tale I use to escape reality.

Why am I drawn to these stories? Why are so many other people too- Christians and non-Christians alike? Why do our hearts yearn for justice to prevail, lives to be saved and “happy endings?” If our hearts are yearning for something, then there must be a real need for it that can be fulfilled. If I yearn for affection, it must be that a real thing called affection is out there and available to me. If my soul yearns for freedom, it must be because there is a real element of freedom out there that can fill that need. C.S. Lewis wrote in Mere Christianity:

If something is not real- how can we long for it? I would say, as CS Lewis does, that the reason people are attracted to these kinds of stories is not to escape reality, but because their hearts are yearning for a need which actually exists, and can be filled.

Every happily ever after ending story has some Jesus elements to it. There is some aspect of the Gospel story in them and we are drawn because we have a real need that only the True Gospel of Jesus Christ can fill. Where is this story going? The story of all creation begins and ends with Jesus.

Jesus said: “I am the Alpha and the Omega, the beginning and the end.” (Revelation 21:6) In that statement Jesus is declaring that HE is the beginning of the story and HE is the end of it. He has authored it. The promise of Jesus the messiah is given in Genesis 3:15. God speaking to the serpent says: And I will put enmity between you and the woman, and between your offspring and hers; he will crush your head. 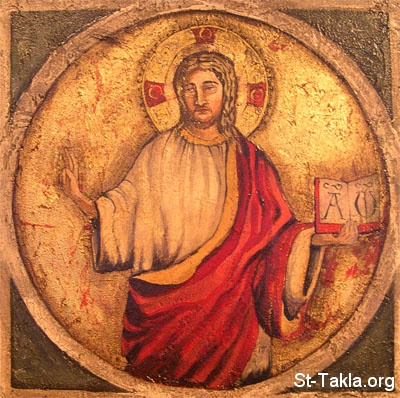 The beauty of the perfect sacrificial life intersected time with God coming as man in the middle of history to save us.

[Jesus], being in very nature God, did not consider equality with God something to be used to his own advantage; rather, he made himself nothing by taking the very nature of a servant, being made in human likeness. And being found in appearance as a man, he humbled himself by becoming obedient to death— even death on a cross! (Philippians 2:6-8)

The promise of His second coming sets right every wrong, makes straight every crooked place, and is the ultimate victory over death. He will wipe every tear from their eyes. There will be no more death’ or mourning or crying or pain, for the old order of things has passed away. Death has been swallowed up in victory. (Revelation 21:4; 1 Corinthians 15:54)

Jesus’ life, death and resurrection, the story of His redemption of our souls, salvation for our lives and His coming again in glory is not just one more fairy tale to add to the heap. It is THE TRUE STORY to which all other stories are pointing. The Gospel is our bedrock for now and our hope for later. Those who know Jesus and call Him Lord and Savior are a part of His Story. This story is going into “forevermore.”

I look back at my life and see a series of stories. I can see the ebb and flow of the Lord’s weaving mini-episodes of joy and suffering, redemption and salvation all strung together as part of the larger Epic His hand is authoring through history. It is Jesus who drew me to himself when I was just an 8-year-old at summer camp. Every trial, joy and suffering from that point on have been reflections of Romans 8:28-29. And we know that in all things God works for the good of those who love him, who have been called according to his purpose. For those God foreknew he also predestined to be conformed to the image of his Son.

Jesus is working all things to my good, because I love Him. He has called me according to His purpose. He has purposed me to be fashioned to look like Him. He is the “Author and finisher” of my faith.

Where is God’s story going? I think it is best set out in 16th Psalm. 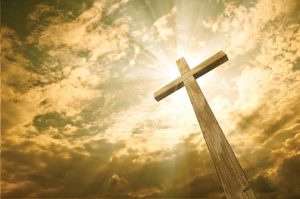 Psalm 16: 1 begins with a cry of desperation where David calls out for God to save him. Preserve me O; God for in you I put my trust.

In the midst of suffering and despair it is the longing of every heart to be saved. God’s story has us going from despair to SALVATION.

David then moves to the recognition of God as his greatest treasure, and the renouncing of idols.

O’ my soul you have said to the Lord, you are my LORD. Apart from you I have no good thing… Their sorrows will be multiplied who hasten after another god. Their drink offerings of blood I will not offer, nor take their names 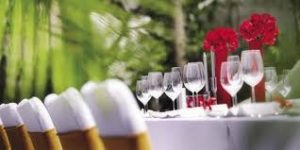 upon my lips. O’ Lord, you are the portion of my inheritance and my cup; you maintain my lot. The lines have fallen for me in pleasant places; Indeed I have a good inheritance. (Psalm 16:2, 4-6)

Every soul longs to be satisfied by good things, but only The LORD is the supreme, sovereign, author of every good thing. There is nothing and no one who can satisfy our souls like the Lord of the universe. God’s story has us going from running after false gods to finding satisfaction in Him, the One True God. 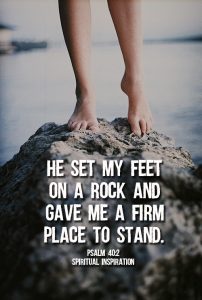 David then makes two important proclamations of truth in verses 7-8. I will bless the Lord who has given me counsel…. I have set the Lord always before me; because He is at my right hand I will not be shaken.

Our souls long for wisdom to navigate this world and for a firm foundation to stand on when the rest of the world is shaking and falling apart. A lot of people are looking in all the wrong places. Only God’s wisdom and His presence in our lives provides for that need. God’s story is going toward filling us with His wisdom. God’s story is having our eyes fixed on Him as our firm foundation. We will not be shaken.

The last part of Psalm 16 has further proclamations of truth from David. Therefore my heart is glad and my glory rejoices, my flesh also will rest in hope, For you will not abandon me to death, nor will you let your Holy One see decay. (Psalm 16:9-10)

Every soul longs to be saved from death and decay. If it were not so, then why do we expend so much effort to stay young, be healthy, and LIVE forever? It is because our souls were made eternal, and He has written eternity on our hearts. Just as CS Lewis says- we long for eternal life because we were not made for this world. In this passage David is making a prophecy of the messiah- “The Holy One” who will not see decay. But moreover, he is making an astounding claim for himself and for all believers: God’s love for us is so great that even death will not separate us

from Him. For God so loved the world that He gave his only begotten son, that whoever believes in Him shall not perish, but have everlasting life. (John 3:16) God’s story is going toward our Salvation and holding our lives through eternity.

The final verse of Psalm 16 is where David gives us a glimpse of that eternity: You will show me the path of life, in your presence is the fullness of joy, at your right hand are pleasures forevermore. (Psalm 16:11)

Every soul longs for everlasting life, joy and pleasures forevermore. We want the fairy tale ending. God’s story is moving us toward this ending. Only it is not just a fairy tale. It is real.

There is nothing our heart desires that has not been placed in this world to fill that desire. In fact, God went so far as to place himself into the world to fill the ultimate need and desire of your heart. Eternal life, treasure that will not fade away, and a love that will never die.

For those who know Christ this is where your story is going:

And they LIVED happily, nay- JOYFULLY EVER AFTER. 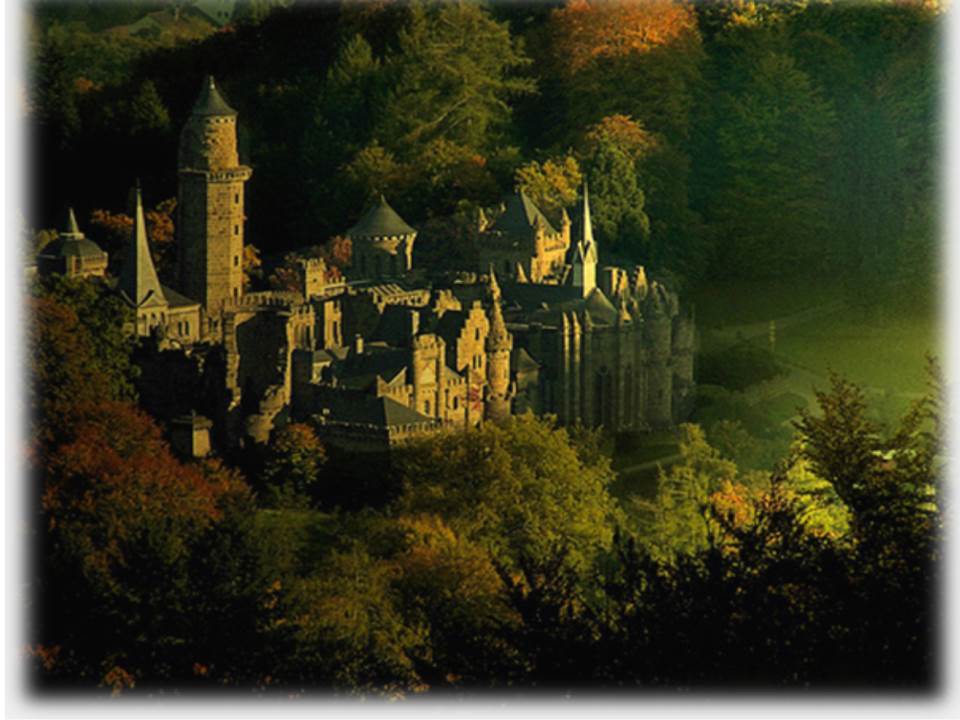