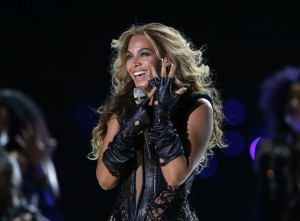 How many of you watched the Super Bowl and half-time show this year? Well, we did. Doug, and I went to a small Super bowl party in a secular home. During the half-time show we had one of those moments where you just get a dose of how broken the world is. Beyoncé’s figure rose from the stage and the mesmerized voice of our four year old Gracie said: “Whoooo’s that???” Then came the onslaught to our sensibilities that had our hearts breaking and raging all at once. From the television we were bombarded with the irony of Beyonce singing “If you like it then you should’a put a ring on it” while she danced provocatively in nothing more than lingerie. On the one hand we appreciated that women should be valued with the commitment symbolized by a ring, but the message of our culture so openly displayed by Beyoncé’s performance says that getting “a ring” is solely based on the ability to titillate— It’s not about character, integrity or a heart of giving— but “sex appeal.” This is what the world defines as a woman’s value— and so many men and women are plagued by it. “Men too?”  You ask— And I answer “Yes, Men too…”

You see, the onslaught to our sensibilities didn’t end with the bombarding from the television. In the same moments I, personally was also affronted by the criticisms of some of the men watching. I found myself turning into a lioness in defense of Beyoncé! These were not critiques of the message she was sending to women about being slaves to sex and beauty for their worth, but criticism of how: “She doesn’t look anywhere near as good anymore.” And “She’s gotten fat, you can’t see any of the definition in her legs, and that’s what men look at…” Doug and I were literally out of our minds. Doug was thinking about how to address this with our daughter, you know she’s four years old and absorbing all of this, and he was thinking “Uh-oh! Damage control- Damage Control!” While that was in my mind I often tend to think “big picture” so I was thinking on a larger scale of the implications. I hope this doesn’t sound too crass, but this is just the reality of what was spinning around in my little head— All I could think was: “My goodness! If she can’t meet the standard for beauty with fat middle-aged bald guys— what woman can???” That definition of beauty is unattainable! So this is something that plagues men too, because it creates in their minds an insatiable desire for visual “beauty” based on lust of the flesh rather than reality. The viscous cycle it creates for women in our culture and our subconscious striving and searching for both men and women is heartbreaking.

If you are a woman maybe you don’t personally have an issue with beauty. Perhaps you’re one of the lucky ones who has managed to navigate life (or high school) without ever being scathed by the “beauty standard.” If so, wow, lucky you! But if I had to guess this is an issue most of women struggle with. The heavy demands of our culture create two extremes for us- either we are desperately grasping at “beauty secrets,” cosmetics, diets and the latest styles- spinning our wheels trying to keep up with the standard, or we totally give up, throw our hands in the air, throw the make-up in the trash, and live in sweat pants. I want to suggest that neither of these extremes are good! You might think those of us who are spinning our wheels trying to keep the standard are the slaves, but those of us who throw our hands in the air are just as enslaved! Even in our “rejection” of the beauty standard we are still allowing it to control “who” we are. So is there middle ground? Is there a good balance in between? I am going to actually say “No.” The answer does not sit on the spectrum at all. It is not chasing beauty or rejecting beauty, and it’s not a delicate balance in between. The answer comes from above.

We need a radical new definition for beauty that both men and women embrace. We need to perpetuate a whole new counter-culture that defines a woman’s worth with transcendent rather than earthly standards that ultimately decay. Proverbs 31:30 Charm is deceptive, and beauty is fleeting; but a woman who fears the LORD is to be praised.  It’s time we unlocked real “Beauty Secrets,” ones that are not fleeting, but truly captivating— ones that are not tied to age or dress size. True beauty comes as an outflowing of beauty’s source.  That source is the Living God whose life was the ultimate beauty — a life of selfless sacrifice and extravagant love.  Jesus gives us the “secret” to real beauty – it rests in developing and nurturing a personal relationship with Him, where you come to know Him deeply and serve Him selflessly. “Love the Lord your God with all your heart, and love your neighbor as yourself.”  When we practice these “Beauty Secrets” we become empowered to pour out the love of Christ, reflecting His image to the world.   That’s true Beauty. Whether we are 16 or 76, Jesus needs to be the foundation that forms our value and defines the value of others- through the eyes of Christ— not the harsh judging eyes of the world and Western Culture.

But, ladies and gentlemen, we need this, not just to reclaim the truth of our value for “ourselves!” It’s about learning to reflect that true Beauty of Christ to others and creating a whole new culture, a radical new definition of beauty based on a definition that doesn’t come from this world, but is actually radically out of this world! A definition that says beauty comes from a life of selfless sacrifice and overwhelming unconditional love poured out on the poor and broken of this world who need a savior and don’t even know it—- a radical new counter-culture of beauty that makes others who come across us stop with mesmerized breathlessness and wonder… “Whooo’s that?”