Yes, I Understand You.

A Sermon of Grace 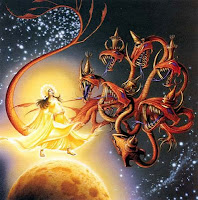 When we read this we can’t look at the “nativity scene” the same anymore. We have to confront that when Jesus was born the spiritual realm was thrust into warfare. Eldridge says the birth of Christ was far more like God’s D-day invasion than an olive branch extended on a silent night. Now, if you know WWII history, you know that once the U.S. joined Allied forces they set priorities for the war effort— “Germany First” and liberating Europe from the grip of the Nazis. From this priority came the D-day Invasion. The Allies invaded at Normandy and stormed across the continent ultimately resulting in the Nazi surrender and the celebration of V-E day— Victory in Europe! As a history teacher I think it would be safe to say a large part of that victory was because the Allies remained committed to their PRIORITY.
Ok so what’s the point?

We keep a Nativity on display in our home year round to remind us that Christmas is just the beginning. We are in the midst of a mighty battle. It reminds us that Christmas was the launching of God’s D-day invasion and The King is steeped in the battle to liberate us! When I walk by and see the Nativity on display I am reminded that we are God’s first priority and His first love. And that makes me love Him all the more.

Look at this verse from What Child is This?

“The King of Kings salvation brings; Let loving hearts enthrone Him. This, this is Christ the King, Whom shepherds guard and angels sing.”
Do you see that??? “Let loving hearts enthrone Him.” That means the more you love the Lord the more you are able to let your heart enthrone Him— put him on the throne of your heart— instead of other things, or other people, or more poignantly, your “self.” How can we suffocate the “Little King Herods” in our hearts? By looking at the love offering God gave us in Himself! When we see the reality of that we fall more deeply in love with Him and no longer rebel. We kneel down and put Him on the throne of our hearts. At Christmas we are actually remembering and celebrating that WE are the focal point of the King’s liberation effort. We cannot look at Christmas without looking forward to the cross. Because the King came down and gave his life for us, we are saved! He launched a massive invasion against evil on our behalf—the evil outside us, and the evil within us. This is why Christmas matters— because it is celebrating our King coming to liberate us! And we can hold on to the promise that the ultimate liberation day is at hand— The real “V-E Day”— that is Victory on Earth…
They will see the Son of Man coming on the clouds of the sky, with power and great glory. (Matthew 24:30)
As Grace sat admiring our Nativity display she said to me: “Mama, I just want to sit here with Jesus for a while. Hmmmmm. How could I interrupt that? And so once again the thought pressed into my brain… We are His priority, but is He ours? This is what Christmas is about—making Him the priority—
“Hark! The Herald Angels sing- Glory to the new born King!”
“Let every heart prepare Him room.”
“Go tell it on the Mountain, over the Hills and everywhere!”
I challenge you this Christmas, to capture the reality of Jesus claim to be The King, because as The King, He lays a claim on your life. Don’t just look at the sweet Baby Jesus, give Him his rightful throne. Fall at the feet of the King who is come— not just giving Him lip service as King who has authority over the heavens and earth, but truly allowing Him to be the  King who reigns over your everyday life.
And sing out—
“Joy to the World, the Lord has come, let earth receive her King! …. He rules the world with truth and Grace, and makes the nations prove the glories of His righteousness and wonders of his love….”
Go and get hold of this King and His love and keep hold of it. As the verse says in O’ Holy Night: “Fall on your knees… hear the angels’ voices!” Make time and room for Him in your everyday— Fall on your knees, rest at the feet of the One True King… “O’ come let us adore Him.”

Jesus said, “My kingdom is not of this world. If it were, my servants would fight to prevent my arrest by the Jews. But now my kingdom is from another place.”

Jesus answered, “You are right in saying I am a king. In fact, for this reason I was born, and for this I came into the world, to testify to the truth. Everyone on the side of truth listens to me.”